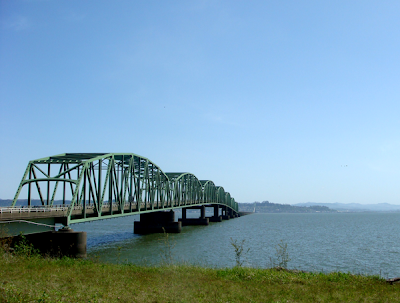 In the Oregon Trail video game, the first thing you do is load your wagon. From what I recall, you need to ensure you buy plenty of essentials from the general store before embarking; things like axles, ammunition, and salted pork. You also need to buy a wagon and horses, the modern equivalent of which is renting a vehicle, which I did. But from the moment I went to pick up our car, I knew our Oregon Trip was going to be very different from the Oregon Trail.

First of all, nobody died of dysentery (I credit our trusty first aid kit for this one. Not that I had to use it, mind you. The simple fact a first-aid kit is near is enough to keep dysentery at bay). Secondly, our car was not exactly what we reserved.

We had booked the cheapest economy on the menu. On the website it shows a little Toyota Echo, but in fine print it says "or equivalent." This gives the rental company quite a wide berth, in my opinion, for what is the equivalent of an Echo? A golf cart? I mean, think about it: the very name of the car suggests it isn't so much a vehicle as the distant reverberations of a car that was. Luckily, they didn't have the tiny economy car we booked, nor did they have an equivalent. In fact, they didn't have anything save for a 7-seater Dodge mini-van. It was a 2009 model, so the back seats folded right into the floor. No muss, no fuss.

I know some folks would have been miffed at the fact they booked a rice burner and got a guzzler instead. Not me. All I saw in that minivan was reprieve: the bigger the cargo space, the less I had to worry about packing "neatly." When I got the car home I was packed in record time, needing only to fold all the seats down, open the side door, and, in heaping armfuls, load the whole kit and caboodle.

It was actually smooth sailing from then on. We didn't have any driving problems at all. Well, except at the US/Canada border where I was harassed for having avocados in the car. "You can't smuggle food into America," the guard said sternly. He didn't seem to agree with my assertions that, since the avocados were clearly labeled 'grown in California' I was technically just returning them. Oh well. We were down two avocados; at least we got to keep the pears (I implore someone to please explain this to me).

After staying with friends in Seattle (Nick, Pete and little Harper), we were on the road to Oregon. Our plan was to take the back roads and ultimately camp on Oregon's northwestern coast. We picked a spot called Nehalem Bay, both for its proximity to the beach and its proximity to Portland. Getting to Nehalem took us out to the southwest corner or Washington state. There, we cross the world's longest truss bridge and end up in Astoria, Oregon.

But it was in Astoria that things got weird.
Posted by Jamie at 2:17 pm 2 comments:

From the time we arrived in Vancouver folks have been telling us about the various must-sees of the area. Many pointed us to Stanley Park, while others took us out to some of the surrounding islands. Yet there is one place every Canadian agreed we had to visit: Oregon.

For me, Oregon found a home in my psyche when I was ten-years-old by way of a black-and-white, 2D video game, "Oregon Trail." The game was a test of courage, a measure of one's boyhood, and a glorious waste of time. It was also one of 30 games in a rotation for the entire fifth grade to use during Computer Lab; that one hour each Tuesday and Thursday when our sticky, prepubescent fingers meddled with the bits and bytes of fortune. Or, as was most often the case, when our under developed hands cramped up from repeatedly keystroking "control + open-apple + escape" on large, plastic-covered Apple II keyboards.

The games rotated every lab. Most of them, though, could hardly be called "games": disks with one single program meant to teach a skill: math, spelling, math, addition, subtraction, math. That's what I remember, anyway. I was always being handed 8-inch floppies with names like "Numbers and Grids", or "The Path for Math, Vol. 8." It's a wonder my math skills are so poor.

So, 26 kids in my grade, and 30 floppy disks to get passed around. Our teacher, we soon realized, had a mind-bending rotation system that involved a blend of quantum mechanics, multiple alphabets, and alchemy. None of us were certain whose turn it was to play Oregon Trail, so the long walk from our classroom to the computer lab often involved hushed, although vigorous and somewhat questionable, bouts of bribery. This was between the boys, mostly; the girls didn't seem to care about Oregon Trail, and I truly believe it was this fact alone that was at the heart of the divorce between Michael McHart and Christy Berry some 15 years later.

One only knew it was his or her our turn on the Trail when Mrs. Shaw delivered the floppy disk. Enveloped carefully in a green protective sleeve, the edges worn from hundreds of unfoldings, the disk descended as if by its own accord onto the table. I'm not sure Mrs. Shaw even set it down: rather, it floated from her freckled fingers as if magnetically drawn to the disk drive.

Legend was, nobody had ever reached Oregon. Ever. Some said it was impossible. Others, that there was a glitch in the game, and the moment you reached the border, it would freeze up, and you would have to re-boot. But real reason nobody had finished Oregon Trail was simple: it was impossible to beat in one hour.

Until one Spring afternoon when I did.
Posted by Jamie at 2:51 pm 2 comments:

You're a Paean, Design

A few months ago, my good (dare I say "best") friend Phil sent me a website layout. Phil, you see, is good at just about everything he does. He's not necessarily what you'd call a "natural" (although he has plenty of talent), rather he simply can't stand the idea of being second best. When he decides to learn something (a sport, a game, a discipline), he doesn't rest until he's mastered it. While I tend to stop at "good enough", Phil continues. He hunts his pursuits: tracks their movements, understands their nuances; chases them until they're captured, killed, skinned. He wears his abilities like fur: they are necessary, and they are trophies.

So when I need anything--even when I don't know exactly what I need--I will ask Phil because I know his passion won't allow him to respond until he's exhausted all avenues. I've asked him for website mockups before, and he's always delivered layouts beyond my expectations. Yet this particular design was different: I hadn't requested it. Phil had tinkered away at a new design for my own personal portfolio, and I'm using this platform to say "thank you."

I've spend the past month building the code. During lunch hours, on weekends, and in between projects I've engineered his design. Electrifying the body, so to speak. So if you have a sec, check out the new look at lovezapp.com and tell me what you think. And don't be nice. Be honest to the point of being hurtful; it's the only way it'll learn.