Last year, Ami and I didn't go snowboarding at all. We had become a bit tired of driving four hours (Wellington to Ohakune), then paying accommodation and lift passes for what always turned out to be below-average snow. Furthermore, the weather up on Whakapapa/Turoa was changeable at best. While it might be sunny driving in to town, by the time we parked and got up the lift, the weather would have changed. Once, we spent an afternoon snowboarding in the rain after a storm moved in on what was earlier a perfect day.

Needless to say, we were eager for some good snow, and we heard Canada had it in spades. So we booked a night at a Whistler hotel for a weekend of snowboarding.

Yet the locals didn't share our enthusiasm. They told us it had all melted, there wasn't much left, and what was left was going fast. We decided to chance it and go anyway. Regardless of how bad it was, at least we were getting out of the city. Besides, we told ourselves, we were used to New Zealand snow (read: ice) so we weren't expecting much.

What we got was some of the best riding I've ever experienced.

Whistler village boasts access to two separate mountains: Blackcomb and Whistler. There are gondolas for both right from the middle of the village (I geeked out about this all day), so we could ride down from the top of Whistler (20 minutes--my legs still ache), grab a coffee, then go up a new mountain. Fun!

Now, I spent most of the time either on my ass or cartwheeling through the air, but it was still rad. Check out some of the photos on my Facebook page.
Posted by Jamie at 2:53 pm No comments:

Ami Works in the Nood 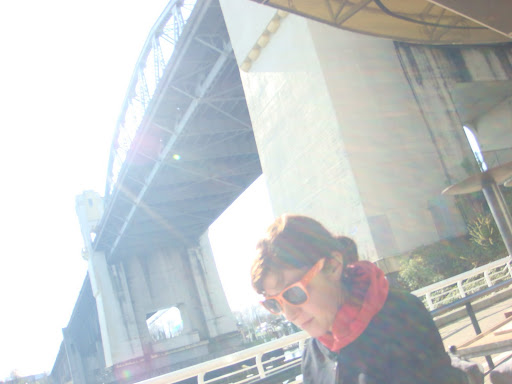 Each day for the past two weeks, Ami and I have been applying for jobs. Ami would send out her resume and samples of her design work to various places, and I would ask my World of Warcraft guild if they knew anybody who might hire a web developer. So each of us worked diligently in our own way. To my surprise, Ami's way bore fruit much faster than mine. Go figure.

A couple days ago, Ami's friends Ty and Dharlia came to stay in our little shoe box apartment (we haven't moved in to the Croatian Villa yet). They day they drove up in their Dodge Ram Get Away van, Ami had an interview with a company called Nood, a retail shop that's a little like Ikea meets Urban Outfitters. Oh, and it's a New Zealand company (Ami later told me that the guy who interviewed her looked exactly like our friend Brent from Invercargill. If you know Brent, this should make you smile). So the fun-filled day we had with Ty and Dharlia was also filled with mild anxiety because Ami really, really liked the company and was excited about the sort of design work she might be doing there. We were driving up 10th street when Ami's phone rang. It was Nood. She could have the job if she wanted it.

The sun was just coming out.

We celebrated with gooey cinnamon rolls and coffee. Go Ami!
Posted by Jamie at 6:52 am 3 comments:

Jamie and Ami Get an Apartment

Ami and I have been searching for an apartment for a few days. Actually, we've been flat out flat hunting ever since we got here, with varying results. Apartment prices have ranged from $900/month to $2,000/month depending on amenities and location. Our favorite areas have been downtown and an area just outside downtown called Kitsilano. Sounds poncy, but it's kinda cool in its kitsch. Case in point: our apartment.

The name on the building, written in cursive at an upward angle and in shimmering gold, is "Croatian Villa." Inside the foyer you find exactly what you would expect from a building with the words "Croatian Villa" written in gold cursive on the front glass door. Imagine if David Lynch and Stephen King got really stoned and went to Vegas to buy furniture. That's kinda what the inside of the building looks like. Our apartment, however, is amazing.

We're on the third floor and are treated with spectacular mountain views, thanks to wrap-around windows and a sliding glass door that leads to a patio. Seriously--the photos don't do it justice. When we took the photo, it was overcast, so the houses across the street stand out. Yet when you're there, you barely notice them. And you'll be here, right? You're coming to visit, right? Right?

Anyway, here are some photos: 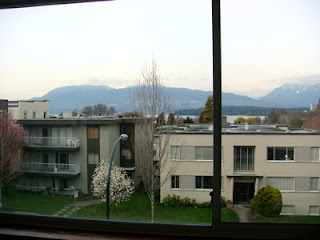 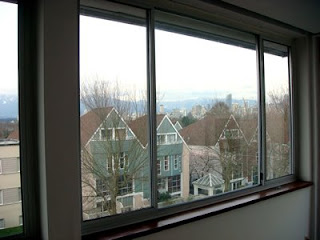 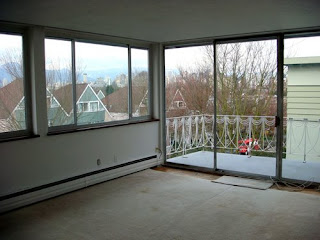 Who Can I Blame for My Vice? 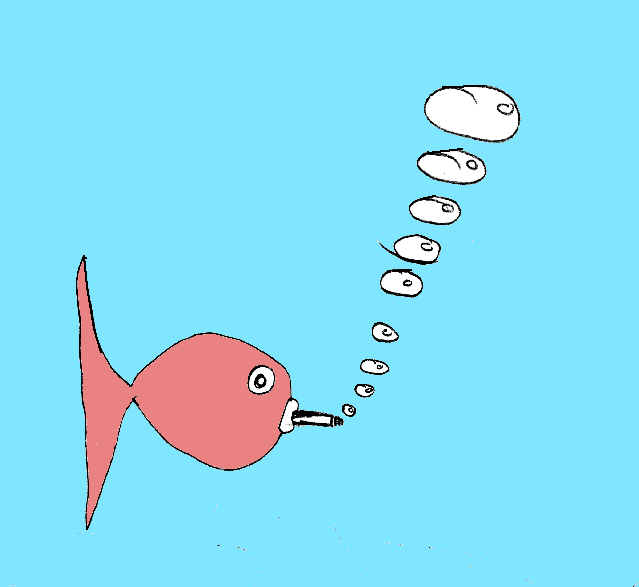 But that was years ago. Now, I'm leaving Seattle and heading back to Vancouver where I'll remain on visitor status, which I can extend indefinitely. But since I can't work in Canada, I have to search for web design contracts in Seattle. Needless to say, I'll be doing a lot of border crossing over the coming months. For you readers who haven't seen me in a while, or for those won't see me for even longer, when we do finally meet just look for the guy with the boy-ish good looks and a head of gray hair because this shit is killing me.

The worst part about my reaction to border-laden traveling is my tendency to go from health nut to heavy smoker in an instant. For this, I blame the French. Well, one French: the girl who begged me to visit her in Paris when I was living in Ireland, then told me to go away when I got there (I'm paraphrasing and condensing a bit, but that's the gist). This happened to coincide with the incident involving the Israeli customs official, as when aforementioned Frenchie gave me the boot I decided I'd buy a ticket to Israel to visit my brother. So there I am, dejected, unable to speak the language, and sitting in a tiny room in a large Parisian airport while gun-toting security guards rifle through my suitcase, causing me to miss my flight. When I was finally shunted through, exhausted (30 hours with no sleep) bags checked, metal detector satisfied, I found myself in a lounge surrounded by signs. Not mystical signs, but little red ones that said, to my dismay, “No Smoking.” Sleep deprived, tongue-tied, and clutching a box of Lucky Strikes, I roamed the dark halls looking for a hidden corner where I might indulge in my intermittent vice. What I found was a group of Hasidim Jews, black-clad and curly haired, chain smoking beneath a plastic sticker that grumbled, “Ne Fumez Pas.”

I ask quietly, “We can smoke here?”

One answers with a puff and a shrug, “They give us no choice.”

I've never wanted to hug a man so badly in my life. Instead I sat next to him, lit up, and watched the lights through the rain-pebbled windows.

But this isn't France. And this isn't Israel. This is Amtrak, and there is no smoking on Amtrak, yet the border looms. If you suddenly find me knocking on your door, cigarette in mouth and bags in hand, blame Canada.
Posted by Jamie at 7:08 am 2 comments:

Dakin's friend Des invited us over for karaoke, so we packed up a few bottles of wine and caught a Yellow Cab to the other side of Seattle. I'm not a huge karaoke fan, but I remembered playing SingStar in Invercargill a few years go, so I thought I'd go along—maybe I'd just drink some beer, smile politely as folks belted out Elton or Aerosmith. Honestly, I'm terrified of karaoke. But since I couldn't very well just sit at Dakin's apartment moping, I decided to go. When I got there I was surprised to find a massive karaoke machine in the basement. This was not Sing Star; this was the real thing.

A funny thing happens to one's inhibitions after a few wines. It's a well-documented phenomenon known as Complete Ass Syndrome, and we were all sufferers (which makes things like karaoke easier). Some of us were tone deaf, and others didn't know even know the tunes being sung (guilty), but Des was not disturbed: she brought everyone percussion instruments, and more wine was poured. After singing an inspired version of Bon Jovi's “Wanted: Dead or Alive,” I happened to look at my watch. 3:00am. And nobody showed any signs of slowing.

And this is when things got weird.

Head spinning with Spanish wine and Billy Joel, the four of us (Dakin, Heather, Chris, and I) decide it's a good idea to get some food before going home. Heather, our sober driver, was just as keen as the rest of us. A few local dives were mentioned, and then Chris shouted, “13 Coins!” Since I had a desperate need to fit in, and I had no idea what he meant, I, too, shouted “13 Coins!” Peer pressure took over from there, and before long we were pulling in to a darkened, half-empty parking lot.

13 Coins was being described to me using words like “Seattle icon” and “local treasure.” Phrases that so often hide latent meanings, like “death trap” or “sloppy dive” or, in this case, “hooker lounge.” I'd like to say that I walked in expecting Denny's. I'd like to say I was surprised when I passed through the massive glass doors, but I was fully prepped by my companions before we got out of the car.

The booths are studded leather and stretch to the ceiling, muffling our laughter and hollering. Even though the diner was at capacity (we had to wait 20mins to get a table—at 3:30am), we felt like we had a private booth in a quiet corner, which I suppose is the point, considering the clientèle. Women walked by wearing next to nothing, all sporting the prostitute's shoe of choice: patent heels, the higher the better. Some were escorting clients, others were mingling with the regulars.