Clouds cling lightly to the heavens, and there is no wind in the capitol city. The train on the Paraparaumu line skates around Titahi Bay and into Wellington Central Station. It is Friday, and the harbour is calm in the morning sun.

It is true people come and go. We are born. We die. What happens in between, however, is not irrelevant. In fact, it is all we have. Does it really matter if you buy the car? Does it matter if you make the light? Do you really need to go to work today? Your friend leaves Tuesday, for instance, and you haven't seen your brother in ages. Didn't your girlfriend mention something about wanting to have lunch in town--you know, like you used to do? You didn't return your mother's phone call. You drank too much, and you suddenly realise what it means to act your age.

In a kowhai tree, two fat sparrows preen, and their feathers puff and jitter against fat, round bodies. One is larger than the other, and the smaller one stretches its tail to reveal clean, white under-feathers. A woman in the apartment across the alley opens her window to pour out the last of her tea. The drink doesn't fall straight, but immediately spreads: unhinging itself in descent, widening, as if to stretch out wings and carry on.

Jamie spent a few days on Waiheke island attending a wedding for a friend of Ami's. The wedding itself, on a beach that was at the base of a very steep slope, was disorganised and particularly accident prone. However, one redeeming feature was the food.

Jamie had heard of a hangi, but had never seen, let alone experienced one. A hangi, as any Kiwi will tell you, is a Maori cooking tradition whereby rocks are taken from a bonfire and piled into a deep hole. The food is then placed upon the rocks, wrapped in blankets, and buried. Eight hours later, the food is cooked and piping hot.

Hangi food generally consists of different meats, potatos, kumara, and maybe a pumpkin or two. Hearty food. And wrapped in with the blankets that cover the food is also the odd leaf of cabbage used to add moisture (one of the guests remarked to Jamie that "there is always cabbage at a hangi." An observation of both the food and the relatively large number of very old women hovering around the food).

Not knowing what to expect, Jamie piled his plate high with venison, pork, beef, spuds--well, everything really. The meat was incredible. Moist and crumbling apart like cake. But when he tasted the potato, the sensation was, well, different. He imagined he might accidentally have chosen the accidental car tire chucked in with the food. The he took a bite of the pumkin. Another tire.

"How's your food?" Ami asked at one stage.

"Um, good." He answered, then added. "Does anyone else's meal taste like car?"

Jamie has kept himself quite busy lately. Two of his projects that have just gone public are a trading website based loosely on newspaper want ads (view), and a collaborative blog about music and pop culture penned with the help of his long-time friend, Dakin (view). 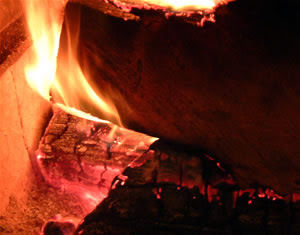 A blast of southern air blew across New Zealand, chilling the country from Bluff Hill to Cape Reinga. And while it isn't winter, per se, the shift in weather was a very convincing argument of what is, inevitably, to come. Some weeks ago, during the last dry days of Wellington's Indian summer, Jamie had the rare foresight to order a shipment of firewood. It arrived today. When Jamie, Ami, and Nick arrived home there, in a pile before the garage, was three cubic metres of wood, a mixture of dense macracarpa and softer pine. One perfect for catching from fuel as thin as newspaper; the other slow-burning, letting go so gradually embers glow still at 6am, when Jamie's alarm sounds.

It takes the three of them a mere 30 minutes to move the wood from the driveway and into the wood shed. With each armful, their heads fill with ideas for the first fire of the season. Jamie dreams of pumpkin soup and apple cider. Ami imagines the easy comfort of slipping on a woolly jumper and knitting a few lines in front of the blaze. Nick thinks of women. Nick usually thinks of women, which is why he and Jamie get along so well.

After dinner (Nick cooked quiche), the three of them sit around the new fire and talk about religion, time, quantum entanglement (briefly), New Zealand cinema, and ukuleles. They talked like they had not spoken for weeks; like they were newly alight; like it had been a year since the air had felt so clean.

For the past three weeks, Jamie has played host to a friend of his, Nick. The situation is somewhat unfortunate, if a little amusing. In short, Nick was cheating on his girlfriend. She found out when she, Nick, and the fling were all in the same footrace together which concluded with both women screaming at Nick while he hid behind a bush. So Nick was kicked out of the house and is now spending quality time in Jamie's spare room.

Tonight, Nick, who's decided the best course of action is to leave the country--a decision with which Jamie wholly agrees--and so feels he must lighten his baggage. One example of this is unloading boxes of books onto Jamie's floor. Thus far, the evening has been spend poring over graphic novels, compendiums of fantasy illustrations, fix-it manuals, and the odd piece of vampire literature. All in all, a rich and rewarding evening--for Jamie, if not for Nick.

Though it all deteriorated when Nick's ex rang him and decided now was a good time to be angry--very, very angry. After about half an hour of shouting, crying, and more shouting, Nick returns to the lounge. Jamie is just finishing a book called Dream Makers: Six Fantasy Artists at Work, but decides to read a few pages over again in hopes Nick will not tell him how the call went. After three week of living with Nick, Jamie is sure he knows very well how the call went. Besides, he's not deaf--the goddamn neighbors could comment on how the call went. So Jamie pushes his face close to a large sketch of a scantily clad woman holding an impossibly huge sword and pretends to be very interested (which is not difficult if you knew the picture in question).


Yet there is no stopping Nick. He begins with a heavy sigh, then proceeds to recount, word for word, what was said. Realising Nick shows no sign of letting up, Jamie decides now is a very good time to write a blog entry.

Sometimes it is futile waiting for technology. Jamie sits before Google Docs and Spreadsheets awaiting a blank screen. Beirut plays on the stereo, and he corrects his spelling as he tries to describe how it makes him want to sing.

There are revelations not worth recording.

At 3am, no matter where one sits, the air feels heavy. But still one may hear an echo of laughter from the other room, a slight giggle of encouragement, very similar to the day when you stepped out of the car to fix the windshield wipers in the middle of the night on the way back to Wichita. There was only darkness. Of course, you should have replaced them before you left home, but here you are, slouched on the shoulder of highway 70 piecing together fragments of your windshield. Vision is imperative. This stretch of Kansas you spent your youth on is suddenly trecherous and there is nothing more important than coming home. With a small penlight, you move about the freeway searching for rubber wings.

There is a girl. There is always a girl.

You find the sliver you were looking for, there in the tiniest light, the only light.

The wind in Wellington is easing, and rain has been scarce since early February. Autumn is coming, and the entire city seems to hold its breath in apprehension.

Unlike the anticipation felt in Spring when the desire to lunge one's self fully forward is undeniable, Autumn suspends us. We know winter is coming, but we're not quite ready to see it yet. There is a mixture of dread and disappointment, like the feeling a boy gets after chasing a girl all Summer: He stands at the train station ready to board, and she waves goodbye. Will he kiss her, or will he forget her forever? The scene plays out forever: the boy chooses an infinite number of possibilities an infinite number of times, but by the same argument, he is infinitely on the platform with one sneaker in the door, suspended in the season of farewell.

As Jamie sits in the French bakery on the Terrace, he thinks about typhoid.

He reads a headline in The Dominion Post about a typhoid outbreak in Porirua, where he lives.

Jamie remembers inoculation against polio (mostly because they poked him in the bum) and the flu, but not against typhoid, that was something young children in Dickens books suffered from. He takes a sip of his coffee and lets his gaze drift out the window. How very literary it would be, he decides, to catch typhoid. He might dress in heavy blue robes during the day and move about at a slow shuffle. At night, he will moan and let the burning illness focus his mind on what he's never done, and then he'll moan some more.

Jamie suddenly remembers that one of the symptoms of typhoid is diarrhoea. Perhaps he will not catch typhoid, after all. No, indeed he won't. Instead, he invites readers to listen to a song by Sufjan Stevens (thank you, Dakin). Note--no video, just music.