This is turning into a bit of an epic, eh? Here's it's been nearly a month since we got back from Oregon, and I'm only getting to the first night! Ha! What a crazy thing, Love is.

So instead of more tales of 'whoa,' I thought I'd post some of the photos we took of the trip up to where I've posted. Which is to say, Day One.

Click here to view our photos (so far) on Picasa.

Oregon Trail, Pt. 3, Astoria and Beyond 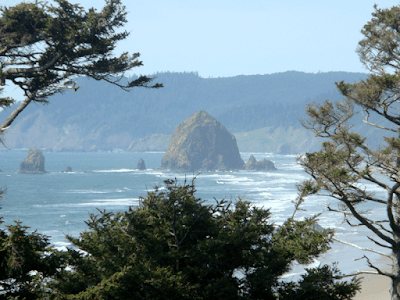 For those of you who grew up in the 80s, you can probably guess by the photo where this is going. From the moment Ami and I drove into Astoria, I was haunted by nostalgia: I had seen this place before--or at least parts of it--although I had never been to Oregon, let alone Astoria. It wasn't until we had driven our van a few kilometers out of town, at a look-out point, that it all fell into place.

Astoria was where The Goonies was filmed.

If I had known how to back-flip, I would have done one. The Goonies! Of course! And for the next hour my long term memory high-jacked my short term and took it for a joy ride down memory lane. I quoted scenes and replayed actions sequences like I had just viewed the 'ol flick. We dubbed them "The Goonies Rocks." Partly because we didn't (yet) know what they were called, and partly because it was just plain fun.

The rest of the trip was kinda boring after that.

No, I'm kidding. This little hallelujah was a mere blip on the radar compared to the rest.

That night we camped an a spit called Nehalem Bay, and it made me miss New Zealand. Here's why. When Americans go camping--and I'm generalizing here, but it's my blog, and I can bloody well do what I want--they tend to bring their homes with them. To the modern Yankee vagabond, the idea of pitching a tent is repulsive. And why would you want to when you can hitch up a mobile apartment to your Ford F350? I remember when I was younger and my family would go camping around the lakes in Kansas: these people were there then, too. While we were hauling arm loads of driftwood and kindling from the rocky beaches of Fall River Lake, there were a half-dozen "campers" lighting their gas grills and watching TV. It made us laugh then, but I think it took Ami by surprise. We couldn't walk 10 meters without her muttering, "Jesus Christ," or, "Holy God Almighty," or "Oh holy Jesus Fu"--well, you get the point. It was a religious experience.

Since the campground at Nehalem Bay catered to RVs and trailers, the ground was mostly paved. Yet a short walk around the toilets and we were standing amongst dunes pocketed with marram grass and white sand, peering around dramatic cliffs toward the Pacific. Equipped with 40oz of Pabst Blue Ribbon ($2 each from the corner store!), we whiled away the evening singing country songs and snapping photos. For a moment, I forgot I was ever anyplace else.
Posted by Jamie at 5:19 pm 2 comments: 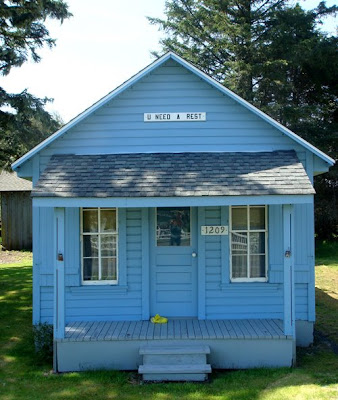 I just took a cold shower. And I mean just now, not in the context of the Oregon trip. I took a cold shower, cracked open a beer, and promptly chopped it like I was at a college kegger. It's been that kind of day. I'd love to tell you more about it, but I think I was talking about something else here. Where was I? Oh, yes: Astoria.

Soon after driving over the Astoria-Megler bridge, I was haunted by a lingering deja-vu. It wriggled into my senses and hung there like a sneeze that can't decide whether to come or go. Was there something about the double-story homes: their proximity to each other, how they peered through the hill top pines? Or was it the angle of the street to the sea? I just couldn't put my finger on it. It was as though some distant memory was projecting the town against a screen like a slide show or a reel of dusty celluloid.

I kept driving. Astoria was behind us in a matter of minutes, but the answer to the mystery still lay ahead.