According to this source, Jamie would have to drink 105 cups of coffee in a sitting before croaking.
Posted by Jamie at 11:40 am 2 comments: 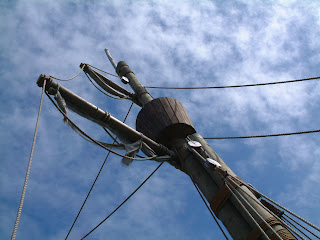 Jamie sits on the couch in his lounge and peers out the window. Just beyond his the boundary of his back yard there is a hill. Atop the hill is another residence which looks directly into Jamie's lounge. Often when he looks out the window, Jamie will see the occupants of the hill house looking back. Never in a spooky way, but simply as a someone momentarily lost in thought and gazing into space, or in most cases gazing into Jamie's living room. And there are, of course, the awkward moments when both Jamie and the woman on the hill decide to glance out their respective windows at the same time. For less than a second, they are two people looking at each other: completely natural. Yet there is something uncomfortable about it, something in the gut that forces both to quickly look just a little bit to the left as if to say, "Nope. Didn't see you there. I was actually concentrating on the aerial."

Jamie and his brother, John, have loved the cartoon Aqua Teen Hunger Force since its inception 7 years ago. So when they learned that the creators were somehow implicated in a "terror" plot, they were both rolling with laughter. However, for a more serious analysis of the situation and how it relates to the East coast of America's Puritanical roots, read this article.

(image stolen from www.boingboing.net. If you're from BB, and you don't want it posted here, just let me know.)
Posted by Jamie at 10:04 pm 2 comments:

Breakfast on the beach again. Another scorcher of a morning. My toes are showing wear: blisters from jandals and Tevas are making it increasingly difficult to walk.

We had to be off the island at 2:00 to take Katrina to Nelson. Crossing at high tide was a test of strength and endurance. What appeared to be a gentle flow into an estuary was, in fact, a very fierce flow into an estuary. Katrina and Susanne loaded up the sea kayaks with emtpy LPG bottles, rubbish, laundry, and all of our gear. Katrina and I were to row to the other side with all the gear, then I had to row back to get Ami. Simple, no? It seemed easy enough on the way over, but kayaking back alone was downright frightening. I paddled until my shoulders burned, but for a moment it did nothing more than keep me in the same place--the outgoing tide sweeping through the small channel was very adamant that I be swept out to sea. I feel like I just made it. Kayaking back with Ami, I let her do all the work.
Posted by Jamie at 9:49 pm No comments:

Jesus Christ, it's hot this morning. We eat breakfast and drink coffee in the morning sun. Katrina and her sister, Susanne, talk between bursts of bickering and song.

Late morning, we scatter--each finding a place to read. I hang in the hammocks among the pine, while Ami sits in the beach grass reading about the history of the Middle East. We only join up again when it is time to eat and drink.

Clouds come, and with them a slight rain. I fall asleep listening as it settles into the trees. When I awake, it is time to eat again.
Posted by Jamie at 9:43 pm No comments: 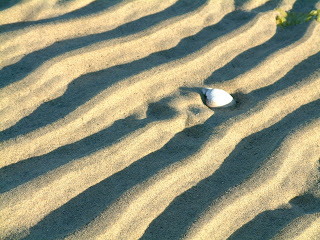 Awoke to dawn chorus as I have every day on the trip. Fell back to sleep soon after its conclusion, re-awakening some hours later to pack up the tent.

Walked part of the Abel Tasman. It took 1.5 hours to walk to Appletree Bay where we swam and lay in the sun for another 1.5 hours. Hiking out, we picked up people’s trash.

Have seen the following wildlife so far:


Spent some more time on little Kaiteriteri before meeting up with Katrina.

To get to Katrina’s island, we had to load up kayaks with groceries and row to Jackett island off the coast of Motueka.

The evening played out like a melodrama, or some dark comedy that I wish I had the wherewithal to write. Maybe soon.

Relieved that we have no place to go for the next three days. Isolated on this giant sandbar, the North Island on the horizon, I have to focus very hard to believe there is a world other than than the sand under my legs and the sea everywhere else.
Posted by Jamie at 11:09 pm No comments: 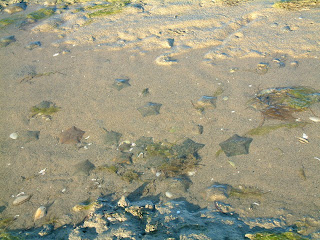 note: getting dark and more difficult to write. 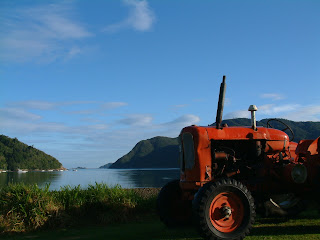 Jamie and Ami spent a week moving between beaches in the northern South Island. What follows are notes from Jamie's journal.

first of all, don't pack sleepy. after a mere 3 hour kip we tried to get up and pack at 5am. we managed to forget the following:


A dinner of bread and hummus sitting on the beach, while nice, was bitter sweet knowing we'd be chewing coffee tomorrow morning and eating dry breakfast cereal. 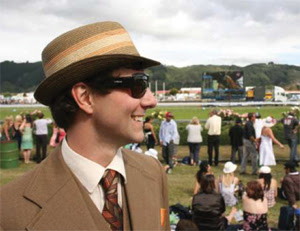 Horse racing boasts a long, sometimes dubious, never boring history. Across the globe, from the Kentucky Derby to the Melbourne Cup, there is one unifying element; one signature sight that has defined the track for generations: hats. The races would be little more than booze-laden gamblefests were it not for fancy hats. It's an undeniable fact, and one Jamie was all too aware of. Unfortunately, Jamie did not own a hat.

The panic set in early. Choosing the right suit was easy. He had a three-piece wool number he found at an op-shop (note to outsiders: "op-shop" is Kiwi for thrift store) a couple of years ago that set him back a mere $15. But it would all fall short if he was unable to tie it together.

Luckily, Wellington had a hatter. Not a hat shop or a clothing store with hats--a proper hatter complete with the little machine that stretches hats for the perfect fit. He had been inside for less than a minute when he saw it: on a high shelf, atop myriad versions of itself--his hat. It had to be.

"You after the 'pork pie,' mate?" called the hatter.

He even liked the name.

What a crummy week, Jamie thinks. And it was only Wednesday. He raises his hand to the bridge of his nose and squeezes hard--a small pinch to distract him from pressures elsewhere.

"I need a distraction," he says outloud. His fellow Web designers peek over their monitors.

"I could sing a song," Liam offers, and proceeds to belt out a few bars of Maneater.

"No, I mean I need a REAL distraction, like what beer does for you." Jamie said, and as soon as the words were out of his mouth, an email from Ami arrived in his inbox.