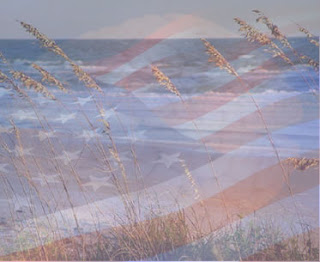 There is a magnolia tree behind this house that has yet to bloom. Inside, Dakin sleeps on the couch, and the dishwasher murmurs its whirring repititions. America snoozes, in parts, and I am for the first time in years witness to the slumber. I am remembering things I was unaware I'd forgotten.

This morning there was banging. The neighbors upstairs were rushing around to leave their apartment, but they were being about as subtle as polka. Granted, I was hungover. The previous night (and the night before, for that matter) were spent drinking pinot noir and PBR with Dakin and his Seattle friends (note: please ask me personally about the folks he introduced me to). Needless to say, the stomping did not do much for my crummy disposition.

Six years have passed since I was in America.

But some back story: I took the Amtrak from Vancouver to Seattle two days ago, and I'm just now recovering from reverse culture shock. It's taken three nights of booze and smokes and three nights of new news and a few new "hey yous." A few crazy bitches and too many scumbags. I've gone from jet lag to sleeping bag, from footpath to sidewalk; rubbish to trash can; trolly to shopping cart; fag to ciggy. When I passed through immigration to board the train, I told my Odyssey story to the clerk who replied unfazed: "Welcome home. Glad you have you back. First car on the left."

I was reintroduced to the States and it was like picking up an old, sick habit and finding you really enjoyed it. The moon is rising over the houses next to me. Two blocks away a couple is laughing, and I suddenly realize I've been missing America's turbulence:

We are junkies at the airport. Smoking. Drinking. Standing and weaving. We are on the verge of being detained, the knowledge of our incarceration barely registering: our audience will not tolerate weakness. We have no class. We are not the English, their dignity clinging like names to their disparate tongues. We are neither France nor Spain with histories as dynasties and families like feuds. We are not the sore of sequestered nations (call it what you like, there are among us the conquered) but rather the festering wound in mid regen. We are the major chord. We are the Lazy R but we are in Russia. We are the terror and the terrorist. We are fat. We are Jewish. We are Indians among Indians. We are racist and ignorant. We are brilliant and the definition of compassion. We are drunk on Sunday afternoons and we are in love with the idea that we might just live forever. We might beat this one after all. We are the furious and terrifying notion of perpetual energy. We are the chilling notion that when the wine wears off, we might just keep going. Breakfast, anyone?

The tree behind this house will bloom, but not tonight. Tonight is for the toast. And tonight the toast is to recollection, may it remain.

Some Things I Will Miss About Wellington

New Zealand had been home since 2003. And while my first years were spent in the deep south town of Invercargill, Wellington has been the scene of my fondest southern hemisphere memories. From ducking into cozy Cuba St. clubs, to rubbing elbows with the suits on lower Lambton Quay near Parliament. So before I flew out on 26 March, I snapped a few pics of some things I will miss about Wellington.

Waiting for the train at Plimmerton Station 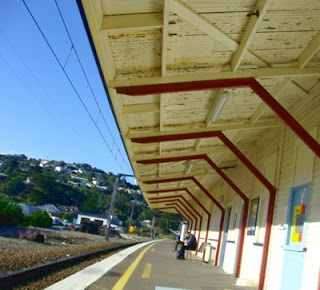 Only rarely did I get the chance to catch the train here (my regular spot was Porirua/Titahi Bay, being that it was where I actually lived). The beach is 20 meters away and the old surrounding architecture feels welcoming.

This part of this street 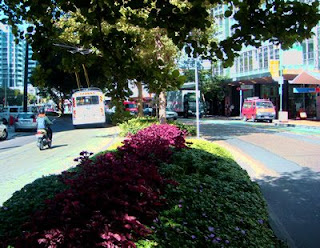 I had a contract with a government department that was on the other side of this street, and I for the whole year I pause here as I walked across. I really can't explain why, but it just struck me.

Paranoid pedestrians, and the reckless drivers who make them so 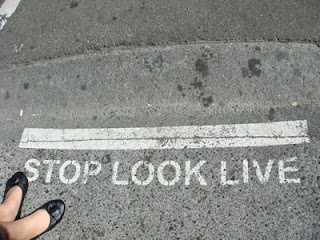 A pedestrian is hit by a car in Wellington more than once a week. About a year ago the city council pushed out a huge "don't be a bloody moron" advertising campaign that made pedestrians out to be little more than wandering cattle. At first I was a little upset, being a pedestrian myself and observing boy racers hooning around town. Yet after witnessing a few of these accidents first hand, though, I really can't say who's at fault. 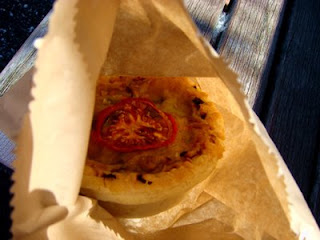 My good friend Nick introduced my to Trisha's Pies. I will forever be in his debt. (X-large winter vegetable pie pictured here) 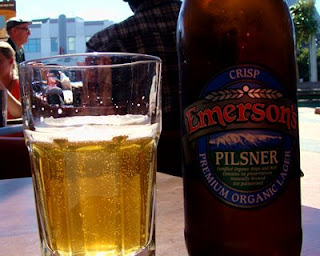 Goes down lovely with a pie from Trisha's

The Chinese busker who plays the Morin Khur

He was without-a-doubt my favorite busker in Wellington. I always carried a few dollars in my pocket in the chance I might see him--and on my last day in town, luck had it that he was playing in the tunnel to the train station. Amazing how hey plays on the wall too, eh? Now THAT'S talent. 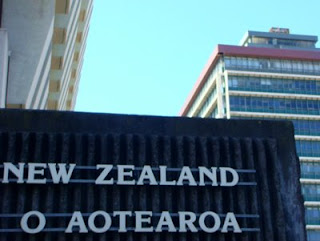 Kinda like that one part of that one street (mentioned above), I can't describe why I like seeing this, but I really do. 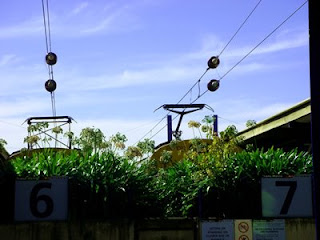 The trains may not have run on time, but they sure did look pretty sitting there.

Remaining in one place for too long causes a sort of anxiety, a fidgitiness akin to drinking too much coffee. So six months ago, Ami and I decided we wanted to travel again, narrowing down our choices to Australia, Canada, and Bolivia. Considering Australia and New Zealand aren't that culturally different, and that Bolivia is a wee bit unstable at the moment, Canada stood out like a snowman at the beach. So Ami applied for and promptly received her work permit, being that she's a Kiwi. It's much more difficult for Americans to get work permits in Canada than it is for New Zealanders (actually, it's difficult for Americans to get work permits anywhere, let alone the Great White North), so it will be a challenge finding work for me once we get there. "There" being Vancouver, BC.

Let me just take a moment to mention how easy the preparation has been because of Ami. Her organizational skills are astounding. Within days of buying our tickets (which she arranged), she'd made a calendar with all the important days outlined: who was visiting, when we needed to cancel this service, when we needed or arrange storage, by when we needed tenants in our Titahi Bay home. . . all I had to do was pick up heavy objects and put them back down again at her command. Compared to the chaos that was leaving for Ireland, and then leaving again for New Zealand, leaving for Canada has been as easy as breathing.

But we haven't left yet. Ami and I fly out of Wellington at 6pm on 26 March, to arrive in Vancouver at 1pm on 26 March (I know--kinda messes with your head, dun it?). We just have a few more days of goodbyes, and then we're off.

For my friends and family in North America, I can't wait to see you.