From Wichita to Denver 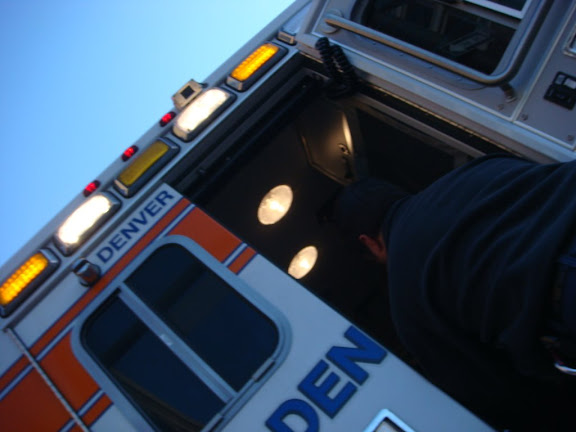 I only had one cryptic email from Drew telling me how to get to his house. Normally, I would ask for clarification; something simple, like directions, maybe. But this is Drew, and clarity does not become him. "Take a bus downtown and get a beer at 'The Hornet.' I will find you."

This is Drew's way of asking me to stay with him for a couple of days.

Slipping into my role as 21st century Odysseus, I took this as my call to adventure. I found the bus, found the bar, and ordered a couple of pints. Here, I waited. There were a couple of free papers in a news box outside, so I grabbed a copy of "The Onion" and giggled through the articles with my glasses of Guinness.

One hour later and I hear sirens. In a large city, hearing sirens is unremarkable. But these sirens sounded like they were right outside the bar. I looked up to see an ambulance screech into the curb. Two men jump out and run inside the bar where I'm halfway through my third beer. It's all an act of observation until they rush over to me and grab me by the shoulders. "We got him! Go!"

This is how Drew picks me up.

I rode in the back of the ambulance (Drew's "office") for only 10 minutes, but it was long enough. When he dropped me off at his house off Lower Broadway I got to meet his girlfriend, Chrissy, and his friend, Dave. Both would be my accomplices in the revelry that would soon follow. 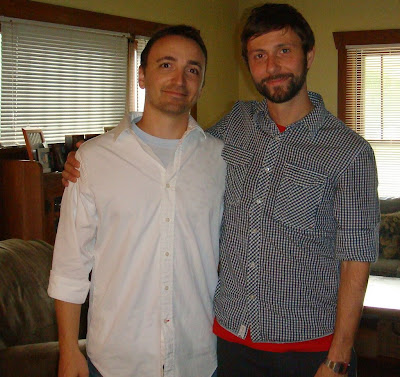 I met Phil Sueper when I was ten years old. We started 3rd grade together and became immediate best friends. On July 15 2002, I boarded a flight to Ireland, telling Phil I'd see him "in about a year." Six years and seven countries later, I landed at Wichita Mid-Continent Airport. Phil was there to pick me up.

The trip from my new home in Vancouver to Wichita was one made primarily to see my best friend. We didn't plan anything--no trips, no nights out, and no "welcome back" parties. We sat around his house surfing the net, grabbing coffees, and telling stories of success and stupidity. It was like no time had passed.

I also got to experience Phil's gorgeous (and frighteningly intelligent) children. We played Wii sports, wee sports, hide-and-go-seek, and Trav's favorite game "where's Jamie's wallet?" This was way better than his other idea for a game: do passports float?

I'm flying to Denver in a few minutes, but I wanted to say thanks to Phil and his lovely family for letting me stay for the week. See you in about a year, buddy.
Posted by Jamie at 2:58 am 1 comment: 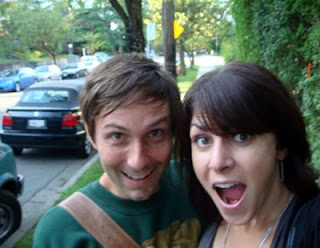 On the first of October 1977, I was putting my mother and father (but mostly my mother) through tremendous agony. Thirty-one years later and not much has changed.

To say my mother is timid would be like claiming Rambo is eloquent and precise. Her yearning for adventure and her nimble way around obstacles taught me a lot about value. Namely, that it's subjective. While I admire folks who can force their way to victory, obliterating confrontation, I tend to favor those who know when a fight just isn't worth it. So I would like to thank my mother for teaching me how to say "screw it."

My father, on the other hand, couldn't be more different if he were a piece of furniture (for which he's been mistaken on more than one occasion). His calm, calculated demeanonor not only saved me hours of math homework, but also saved himself hundreds of dollars of broken machinery. You see, dad's the kind of guy who reads the instructions. I, on the other hand, tended to force things into place and if they didn't go, I'd smash them with the nearest blunt object. For example, instead of letting me tear the air and oil filter from the old Chevy, he calmly showed me the correct way to use tools. So I would like to thank my father for teaching me how to "unscrew it."

Thanks mom and dad; if it weren't for all your screwing, I wouldn't be here.
Posted by Jamie at 10:39 am 3 comments: