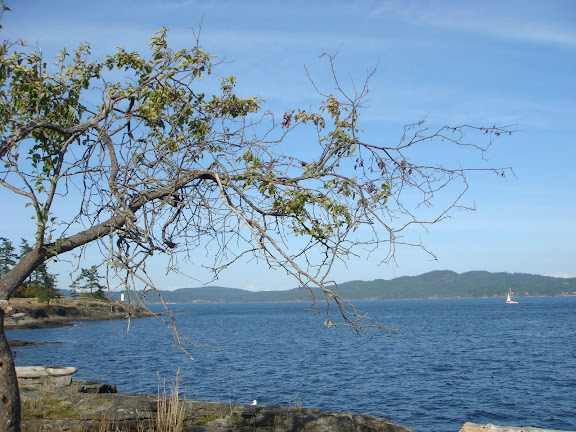 Our friends Anne and Ben invited us to go camping with them on Saltspring Island. They are, for lack of a better term, our besties in Vancouver. I first met Anne when she came to visit us in Wellington last year, and it was she who welcomed us to BC by giving us her spare room until we found an apartment. Anne and her partner Ben are also the proud owners of a 2008 human female named Chloe. So I suppose we went camping with Anne and Ben and Chloe.

But this is not a story about Anne and Ben and Chloe.

Ami was particularly excited to camp on the island because of the lack of bears. This was before she learned that bears often swam over to the boat docks. In fact, a man was mauled just yesterday. This would be the third time we narrowly missed being attacked by bears. And by "narrowly missed" I mean "we camped in an area where weeks later a bear was sighted." Close call, that one.

But this is not a story about bears.

The ferry to the islands left from Tsawassen port, southwest of Vancouver. It took just under an hour to cross the Straight of Georgia, weave through the narrows of Mayne Island and Parker Island, and come to rest at the dock between two spits of land where Long Harbor Road comes to a dramatic end. Once off the ferry, Ben drove to the camp site on the southern coast near Beaver Point.

The rest is normal camping fare.

We took turns cooking: Ami and I made green Thai curry; Anne and Ben whipped up some awesome burritos. In various areas around the campgrounds, there were communal fire pits. We joined one on the first night--when there were still dozens of holiday makers staying on the long weekend--and on the second we made our own.

In between bouts of eating (because when you're camping, that's how you measure time) we hiked the length of the small island. There was an historic farm near our campsite, plenty of secluded beaches, and more wildlife than I expected. Once, the forest cleared and we saw that we walked near a small, still lagoon. Grass the color of lion's fur grabbed at our knees. All around us there buzzed dozens of giant dragonflies. They would zoom, hover, and chase each other and seemed to take no notice of us. Indeed, as we walked back into the woods I glanced back to see them continue their confounding aerobatics just as they had done before we got there, and as they would keep doing long after we were gone.

There were coffee breaks, brief swims, constellation spotting (that one? That's Sessimadarian. And over there? I think that's Orion's nose.), and even a bottle of champagne. Anne and Ben will be returning to New Zealand soon. We're very happy to have shared this brief moment with them.

View more pictures of the trip here.
Posted by Jamie at 2:17 pm No comments: