Fireworks, As in Everybody Loves

I love fireworks. I understand this is like saying "I love oxygen" because the number of people who don't love fireworks could cram in Phil's old Suzuki. Still, I love them. I love the anticipation leading up to the event: the common awareness that something is about to happen. I love that we all know exactly what is going to happen, yet we still mark our spots on the lawn with giant blankets in order to see it better. And, of course, I love watching explosions.

A few weeks back my good pal Phil posted a bit of a noodler. Specifically, who would win in a fight between a 70lb young puma and . . . you? The context of Phil's post was a historical series of conversations between he and our colleague and friend, Clint. Besides being Phil's office mate, Clint also happened to be to the only member of the Wichita clan to work with me in Ireland. Clint and I had many conversations similar to the one Phil writes about.

The most troubling aspect of such conversations was their hypothetical nature. He and I would sit in the Netg Ireland lunch room and argue for hours (no joke) while drinking awful, awful instant coffee: baboon vs eagle; alligator vs. shark; baboon vs shark; baboon vs drunk baboon. You see the pattern. Nothing was ever resolved, and we would walk back to our desks with a blood/caffeine level so high it should be illegal.

Yesterday, I stumbled upon a video that will shake things up even more than instant Irish. This video--a series of photographs, actually--depicts a leopard attacking a crocodile. Normally, the inverse happens: a young, Christian-minded leopard is strolling the edge of the watering hole and pondering how he can make a difference in the world when SNAP out of the murky depths jumps an evil croc, dragging the poor cat to his death.

Well, not this time.

This is the Law


Every dog owner in Vancouver is required, by law, to provide their pets with regular enemas. This sign is proof. 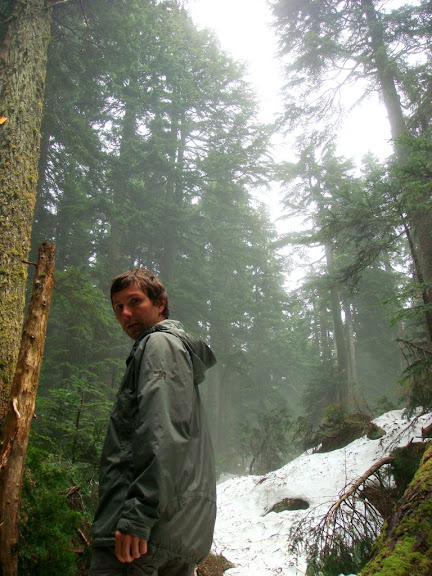 It's been a week now since Ami and I hiked Mt. Seymour, but the stillness of its snowy trails still haunts me. What we thought was going to be a leisurely meander through the forest ended up a slippery slog around the mountain's cross-country ski trails. To say we were "unprepared" would be like saying The Incredible Hulk can be "a little feisty". To our credit, we managed to bring a couple extra layers--including polyprops. This, of course, is Ami's doing. If it were up to me, we would have found ourselves with snow up to our Speedos.

So with snow pack between knee- and waist-height, we tried to step lightly. Careful as we were, Ami and both misjudged the thickness of the ice and plunged a leg into a rushing stream of snow melt. While I was wearing hiking boots, Ami's feet were protected only by light running shoes. I pointed this out many times along the way, to which she retorted with a list of my many personal flaws, sprinkled with the most colorful expletives.

Yet all the cursing and falling-through-ice-into-rushing-streams was soon forgotten when we reached our goal: the semi-frozen Goldie Lake. (mind you, we didn't know it was semi-frozen until we arried). There, we stood between evergreen trunks hugged by deep spring snow, looked up and saw fantails darting through branches. The only sound was their song and the distant stream, which from where we stood sounded like light applause. Although we were only 30 minutes outside of Vancouver, civilization was the farthest thing from our minds.

Check out more photos of Mt. Seymour.
Posted by Jamie at 7:57 am No comments: 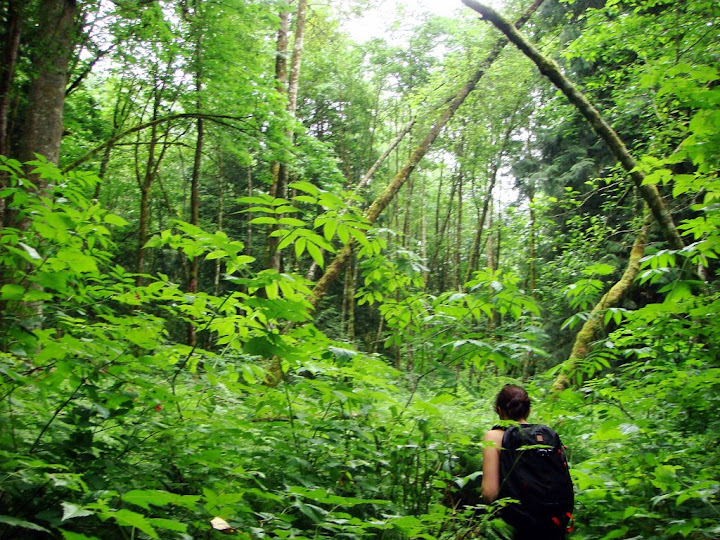 It was Ami's idea to rent a car and drive to Harrison Hot Springs. I wanted to go camping. However, Ami patiently pointed out that we had neither a tent nor camping accessories. "Therefore," she concluded, "it makes more sense to rent a car, take a day trip, and be back home in the evening." I quickly rebutted that doing things that make sense does not come naturally to me. End the end, she got her way. We would day-trip to Harrison on Saturday, then drive to Mt. Seymour on Sunday.

In New Zealand, if you say "hot springs" it elicits images of bubbling hot pools of sulfur-scented water surrounded by forests of giant ferns. Well, either that or Rotorua. Either way, it's much more romantic than Harrison Hot Springs--or hot spring, since there was only one, and it was enclosed in concrete. The surrounding resorts pumped its water into their luxury baths, making the actual spring little more than a warm-ish pond.

Yet that tiny little body of water retained a quality I can only describe as dignity. One hundred meters away from the closest hotel, "the source" was pretty well ignored. Ami and I walked out to it on our way further into the bush. The rain was coming, so we didn't spend too long in one place. With the spring's calm water steaming on as it had (and will) for centuries, we disappeared into the old-growth forest and became, as far as we were concerned, the only people on earth.

View more photos of Harrison.
Posted by Jamie at 10:48 am No comments:

In what could be the most trying months of my brother's life, emails and tweets of late have been written in a somber tone. We are concerned; we are serious. Yet more than anything, we desperately need some dim-witted jackass to make us laugh. I'm taking it upon myself to provide that touch of foolishness and frivolity because being a dim-witted jackass comes surprisingly easy.

Since arriving in Vancouver in late March, Ami and I have spent most of our time strolling the city streets, enjoying live music, and buying semi-expensive footwear. In short, we've been a couple of Townies. Fridays are spent with new-found friends at new-found pubs (not to be confused with Newfoundland friends or pubs), and Saturdays' afternoons are whiled away at the beach trying to remember where we went the night before, and why someone named Barnabus is pxt-ing us photos of his chihuahua wearing pajamas. We decided we needed to 1.) change our phone number and 2.) get out of town for awhile.

For anything and everything travel-related, Ami does most of the planning. She may ask my input once or twice, but she handles 90% of it herself. This may be because whenever asked I usually holler from the other room, "hold on a minute. I just need to run this dungeon with my guild." So last weekend, Ami planned for us two day-trip excursions into the wilds of British Columbia: Harrison Hot Springs and Mt.Seymour Provincial Park. And while Americans celebrate their violent independence with the three Bs (Beer, BBQ, and Blowing shit up), Canadians commemorate becoming an autonomous collective in that great Canadian tradition: the line up. Nothing intrigues Canadians more than waiting their turn. From the busiest bar, to the loneliest hot dog stand--Canada is a queuing nation. So, as visitors to this fine country, Ami and I partook in the many line-ups Vancouver had to offer.

In the morning, we walked down to Granville Island, a peninsular knob that pokes into an estuary known as False Creek (all of this is in the middle of the city, mind you. I don't want anyone getting the wrong idea when I mention "island." In fact, if you were there, you wouldn't know you were on an island. In fact, you'd probably remark, "Oh, what a nice series of shops and cafes. And,oh--a boat!"). This area was host to many a line-up on Canada Day. We started with the pancake breakfast.

Okay, we skipped the pancake breakfast because we couldn't get out of bed. But just assume there was a massive line-up.

As we strolled along the old brick roads, we ooh'd and aah'd at the various queues on offer. The most popular culminated in either pastries or face paint (if children where involved, these often became one in the same). However, we only partook in the coffee line-up and the lunch line-up, though both made us feel very much a part of the culture.

Ironically, celebrating Canada's patient bid for independence made me miss the good 'ol 4th of July. Not so much the fireworks and "Explosive Summer Sale Events of the Year" as the people. Strolling back to the apartment, I caught sight of dozens of BBQs and house parties: good people just having a beer and not thinking much about anything other than what to put on their hamburger. Canada Day--like Independence Day--is little more than a bank holiday unless you have a bunch of friends to help you celebrate it.

So here's wishing all my Yankee mates a happy 4th. Miss you all. Now go set something on fire like a good American!

For a few more pictures, view the Canada Day album
Posted by Jamie at 3:43 am 2 comments: